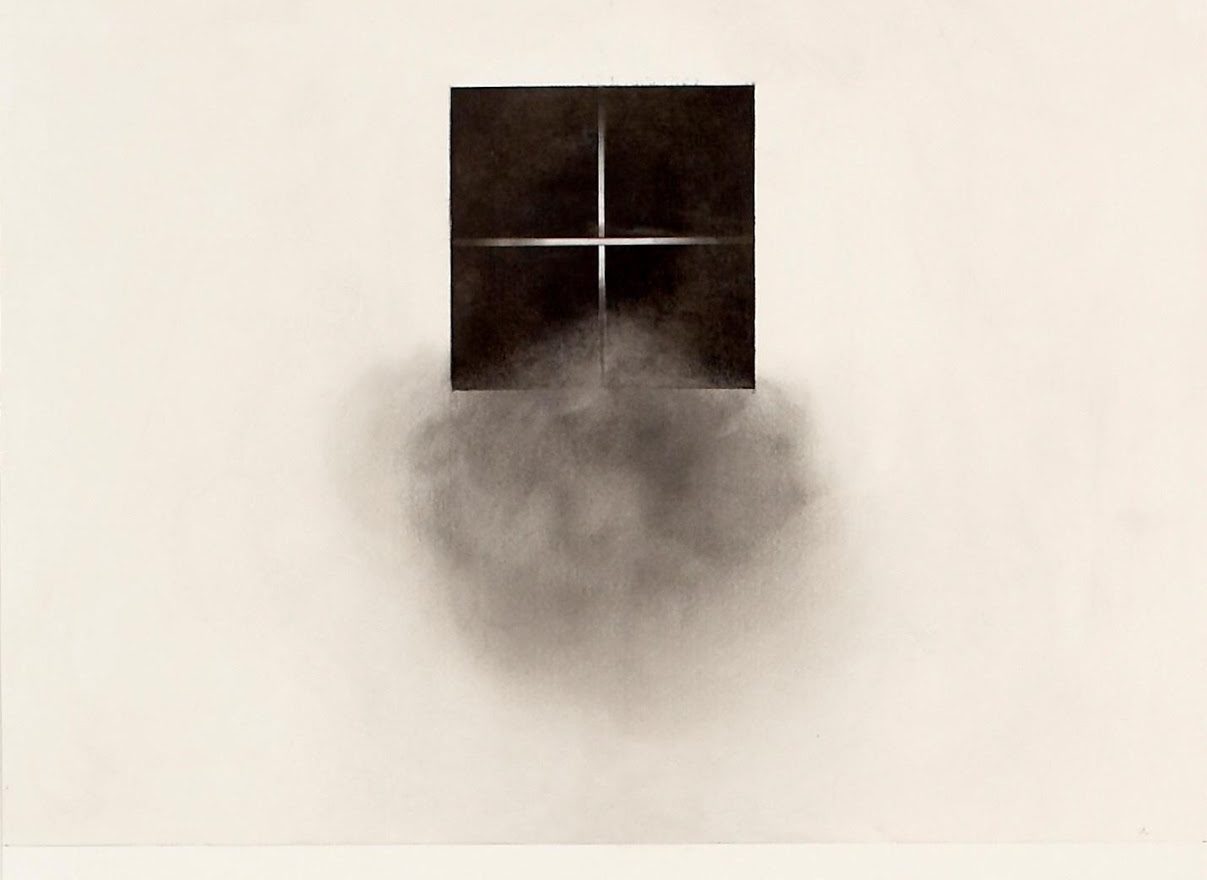 There are many reasons to become attached to a painting. One is that the artist gifted you the painting, and it now hangs in your house, every day offering a new perspective in which to absorb its beauty and power. Every time the light shifts, you have a brand-new painting.

I am the curator of an art gallery and I selected Gerald (Jerry) Auten for a solo show. His black-and-white exhibit was all on paper, rendered in charcoal. One of the pieces instantly became my favorite, and grew inside me throughout the run. When sunlight splayed onto the gallery walls, the painting came forward, becoming three-dimensional. At night, under artificial light, the painting receded against the wall, shimmering in blue tones. The painting became alive—wavering, then escaping, unfolding, calling out. I fell in love.

Jerry titled the painting Auten. He signs his paintings on paper with a stamp of a few numbers from his credit card (you can run your fingers over the numbers like Braille). He uses industrial WD-40 as his medium, mixed in powdered graphite, then buffs and rebuffs until he finds the effect he wants. “A deep black square can be an object or an opening,” Jerry said. “Sometimes you can get a surface so deep, rich, and black that it begins to contain an immense amount of space and light. Your perception begins to equivocate, reading it as both object and void.”

My painting is on the back of an old museum poster. Jerry also uses postcards and smooth, hot-pressed paper to work with. It took Jerry many months to achieve the dense metallic, oily surface of Auten, and he often stayed up all night. The effect is luminous, deeply saturated, mysterious, as well as mischievous, just like the artist himself.

In my house during winter, the black-and-white values of the painting cool down. Summer warms the black-and white-tones to mauve. Each season evokes moods, as does what I place on the table at the base of the painting—flowers in spring and summer, an empty table and a light in winter. Playing with a painting, as part of a still life, is another reason to own a work of art. I’ve chosen not to frame the painting. I’m fond of running my fingers lightly on the smooth, buffed surface.

Gerald Auten is a senior lecturer in Studio Art at Dartmouth College, where he teaches drawing, architecture, and senior seminar. He is also the Director of The Studio Art Exhibition Program. His small office is crowded with paintings stacked against the wall, and a Queen’s Tears plant blooming in his window. We often have lunch in the Indian restaurant around the corner. Because he eats there almost every day, he orders for both of us.

We discuss my writing—which he reads diligently—and his latest work and his teaching. During the pandemic, Jerry did a series of invented craft beer labels on cardboard for friends. They are postcards he sends out; 4-by-6 inches, done with Sharpie, ballpoint pen, pencil, and oil. Some were of butterflies taken from the book Fine Lines: Vladimir Nabokov’s Scientific Art. He sent my husband and me a finely-wrought drawing of a white peony, my favorite flower.

The last time we had lunch, before we both went into isolation, I told Jerry he was an inspiration to me. His generosity of spirit— the energy and focus he gives each and everything he does— is impressive and potent. He is a boundless light of giving (he also wears a faded, worn olive-green painter’s cloth coat that I crave).

His work has been exhibited widely in the U.S. and abroad, and included in a number of museum collections. Jerry has received many awards, including a grant from the Andrew Mellon Foundation, and the American Academy of Arts and Letters. He has traveled overseas to visit artist studios in Morocco and Europe to broaden his understanding of art, as well as given a series of lectures on Contemporary American Art in the Republic of Georgia, and talks about Vermeer in Belgium and at the High Museum in Atlanta. But Jerry will never tell you any of this. I know only because I had to introduce him at his opening reception at my gallery.

Last summer I visited the pigment lab at the Harvard Art Museum. The director showed me a sample of the recently created Vantablack, a substance that absorbs up to 99.6% of radiation in the visible spectrum, like staring into a black hole. Sometimes Jerry’s painting does this to me, and at other times it is a smoky door into my heart. Either way, it evokes a different mood every time I look at it.

There are so many blacks. Chalk black. Iron black. Warm Mars Black. Cool Zinc black. Ebony and obsidian black. Bone black. Lamp black. Carbon black (car tires have six pounds of carbon black in them). Flat, thin, or thick black. Shallow black. Deep black. And now the blackest black, Vantablack. Jerry Auten’s painting, which has graced my home for years now, has all those blacks. The painting talks to me. And I talk back.

About the Author / Dian Parker

Dian Parker is a writer, curator, and oil painter. She lives and works in Vermont.