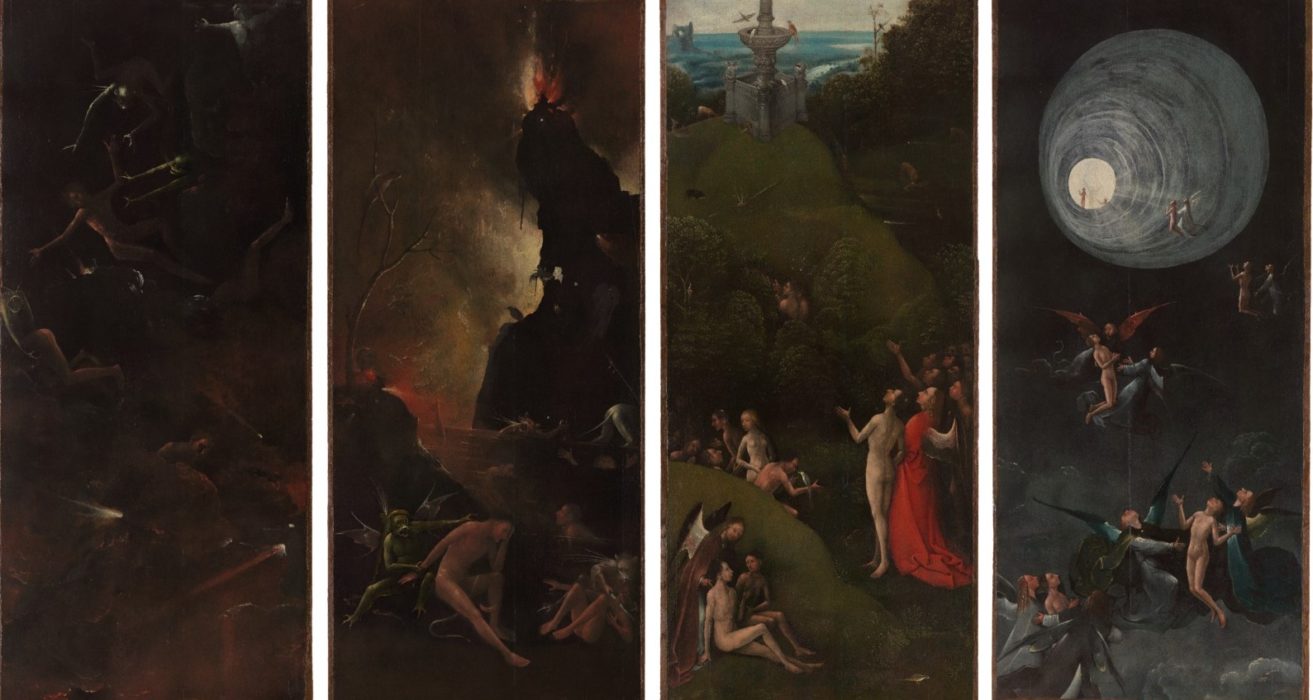 Heaven and Hell in Venice

Overwhelmed by history, a traveler connects to the present via Hieronymus Bosch.

When I rounded a corner in the Palazzo Ducale, I said to my daughter, “Oh look, there’s a Bosch.” I knew what to expect from the painting, so I turned to look out a window. It was April in Venice. Rain intensified the claustrophobia of the ancient alleyways. St. Mark’s was already braced for flooding with its raised boardwalks, lest Venice’s mercantilism be interrupted.

We had been touring Italy, and on this Tuesday we were in the Palace, not just to avoid the rain, but because my husband wanted to see the Canaletto paintings. I did not care. For when I stood in St. Mark’s Square and looked towards the Canal, I imagined the common criminals executed between the two columns of the piazzetta. Their public deaths supposedly warned the citizens against wrongdoing until at least 1750. I wondered what they had done, exactly? Not art, but history overwhelmed my vision. Why would I want to see a painting of St. Mark’s? Wasn’t I depressed enough? The year was 2012, and already tourists wandered around with iPads. They looked down at their screens rather than up at their surroundings. Why did they come if they didn’t want to look at the art and architecture? But then I wondered if maybe technological mediation was the right way to experience the city. The entire place, with its ubiquitous hawkers and privileged few, could have walked out of a Bosch painting wherein most undergo horrific tortures, and only some find safety. Perhaps an iPad would buffer my sense of being overwhelmed.

I joined my daughter for a closer look at Bosch’s polyptych, which is usually called Visions of the Afterworld and dated between 1490 and 1515. After reading the description, I finally looked at it, and on the fourth panel to the right, I spotted a “sun” in the upper right-hand corner. Rays of light were shooting from it. Well, I figured it must shine even here sometimes, so I took a closer look. Those of you expert in Bosch’s work may already be shaking your heads, recalling that there is no sun in that painting, just daylight at the top of the third panel from the left. And, of course, you are correct. I am not an art aficionado. The painting seemed to need cleaning; the panel was so dark, the circle of light stood out–at least, that is one of my excuses for mis-seeing.

When I actually focused on what I had mistaken for sunshine, I found I was staring at a funnel brightening as it ascended the panel and greying as it descended to its wide mouth. The majority of the panel portrays those being taken by winged devils in the opposite direction from the funnel, away from the light into foggy, cloudy darkness. One of the devils has ruddy wings, as if lit by reflection from the opening above and echoing the red of the women’s dress in the panel next to it. A gang of grey-caped devils manhandles naked bodies to drag them below, off the canvas. My stomach roiled.

Suddenly I realized that the brightness, which I had mistaken for the sun, was the entry to heaven. Circled by light, a hazy figure stood in the small round opening at the top of the funnel. Male? Female? A greeter? Two other figures made their way toward the aperture. To enter it, they had to walk uphill through the funnel. I did not dwell on the ostensible religious significance. I did not hear a chorus of angels. What I saw was a portal that led to another world, brilliant and beckoning, especially compared with the rest of the panel. But the contents of the other world were beyond sight. Something clicked: I mistook the opening to Bosch’s paradise as I had mistaken Venice. The Venetian portal I entered as a present-day tourist opened into a past hidden by time, to décor long past practical usefulness, and to work-a-day citizens grumpy in their service to hungry tourists. I could not enter the lives of the present-day Venetians to know them; I could not recapture the reason for their city’s long-ago executions between the columns of St. Mark’s. I had been looking for the wrong thing.

The figurative journey in Visions of the Afterworld sparked an attitude adjustment. For the remainder of my travels north to the Dolomites, I sought the original, physical gate in each city we passed through. The frequently decaying stone arch was usually downhill from the main piazza, so that medievals, perhaps even Romans, had to climb up for rest, for hospitality, for safety. I took these stones to be the portal to that city’s inhabitants and their history. Despite my labor to get there and attempt to retrace their steps, I understood I could know neither the people nor their history except superficially.

The painting taught me to look closely, but also to gaze and to wonder. There are some things we can neither see nor understand. I imagine Bosch never imagined me marveling at his work. I interpreted the images according to a different content, updated and perhaps irrelevant. Yet my discomfort gave way. I was relieved from failing to thoroughly comprehend the past. Bosch’s vision gifted me with a revelation, inspired by his work but quite different from it. His message from the fifteenth century penetrated my present. His images provided a portal that allowed me to accept the disjunction between visiting and belonging.

Nancy Ciccone teaches at the University of Colorado Denver. Her doctorate is in comparative literature. She visited Venice while researching her current mystery novel, The Ninth Box, which is set at the conclusion of World War II.

About the Author / Nancy Ciccone