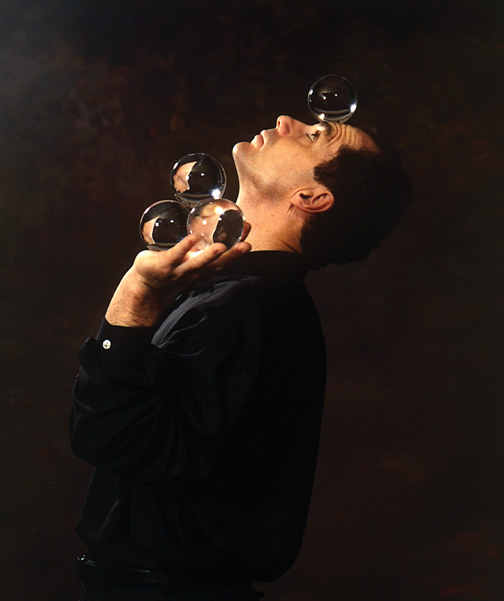 Written by Alexander B. Joy• • • Blogging Fellows, Performance, The Art of Thinking

A philosopher explains the importance of form and freedom in aesthetics, juggling included.

You may have seen a Michael Moschen performance without your knowing. If you’ve ever watched the film Labyrinth (1986), Moschen plays David Bowie’s extremities in the scenes in which he handles one or several crystal balls. (Appropriately, “Moschen” is pronounced like “motion.”) But whether you’re watching Labyrinth or Light or another of his sets, the draw of the unique style of juggling that Moschen pioneered remains consistent. In seeming defiance of physics, the ball glides along his undulating arms and hands as if tugged by some unseen presence; or else it hovers in place, impervious to gravity’s pull. The arresting part is that the ball never once looks as if it’s rolling or rotating. It appears frozen on its axis, yet it moves in ways a stationary object should resist. It’s a difficult sight to wrap your mind around, even after you understand how Moschen’s techniques operate. Jim Henson called it “As close to real magic as anything that I really know.”

This is high praise, to be sure. Yet it strikes me as inaccurate to equate Moschen’s artistry with magic, if only because it misstates what makes it so captivating. The pleasure of magic is the extent to which it cannot be accounted for: the card trick that outpaces both eye and reason, the set piece with mechanisms that the imagination cannot schematize, the occurrence with workings that confound explanation. These sorts of enchantment last only as long as the mystery, dissipating once their devices are exposed. (This makes them no less impressive, of course; it simply marks them as a different beast.) Moschen’s performances, on the other hand, do not hinge upon that element of the inexplicable. Their trick is always in plain sight – the clear glass or acrylic of his ball obscures its roll, and with no moving textures for the eye to detect, it creates an optical illusion of stillness. (Moschen’s preferred term for this kind of juggling is “manipulation,” which connotes both movement of the hand and taking advantage of the viewer. It’s a reminder that the game here is less a sleight of hand than a trick of the eye.) But his performances are somehow more interesting once you know this. You can rationalize what’s happening in one of his sets, but that doesn’t prevent you from seeing what Moschen wants you to see. Try to explain away the movements of the ball all you want. The laws of physics still seem to break before your eyes.

The real mystery to Moschen’s art is how it persists in the face of constraining forces. You can bring your usual skeptical, critical, or interpretive apparatuses to bear on his performances, and attempt to shape and recast them as you like. But it’s as if the raw material – the warp and weft of bodies in impossible motion – lets itself be seen only one way.

If we want to think through constraint and resistance, we can turn to the German writer and philosopher Friedrich Schiller (1759–1805). Philosophically, Schiller was an admirer of Kant (whose aesthetics I’ve touched on elsewhere in Critical Read), and especially appreciative of the powers that Kant ascribed to human faculties of reason. But when it came to aesthetics, Schiller’s interests lay less in how we process the beautiful than in trying to identify beauty’s objective qualities (supposing they existed). Namely, Schiller’s fascination was the question of what beauty is – and how we’d recognize it if we saw it.

In a posthumously published set of writings known as the Kallias Letters (originally written in 1793), Schiller argues that freedom is beauty’s signature characteristic. For Schiller, beauty consists of “freedom in appearance,” which has two defining aspects.

First, a beautiful thing exists “through itself.” External forces do not dictate what the thing is. Instead, the thing is self-determining – it decides what it will be, irrespective of outside conditions, demands, or pressures. For example, you’ve heard stories of artists who create in spite of censorship, persecution, material deprivation, or a host of other impediments. Schiller would claim that, if their work makes no concessions in the face of such obstacles, then it meets this first criterion for beauty. In this regard, beauty always chooses its own terms – not only how it will appear, but when.

Second, a beautiful thing does not let itself be determined according to some external form. Rather, it determines its own form. To picture what this means, consider a painting like J.M.W. Turner’s Bell Rock Lighthouse (my favorite watercolor, incidentally). Schiller would suggest that Turner didn’t “settle” for a watercolor, as if he hoped to chisel a marble sculpture of waves crashing over a lighthouse, but found himself unequal to the task. Instead, Schiller would say that Turner painted Bell Rock Lighthouse because whatever beauty Turner aimed to capture demanded that it manifest as a watercolor painting – in other words, because no other form would suit it. The beauty in question therefore selected its form.

If you’re looking for an explicit account of what beauty looks like, Schiller’s criteria may not seem sufficiently prescriptive. But they do provide a means of identifying when beauty has appeared among us. By Schiller’s metric of freedom, the beautiful is the thing that is always itself – that can only be itself. How do you know that you’re in the presence of something beautiful? When you cannot conceive of the thing existing in any other way, shape, or form.

I will admit that I used to view Schiller’s formulation as a category error of sorts. Asking “what does freedom look like” seemed to me the same kind of question as “how high is up” or “what’s the sound of red” – an effort to ascertain physical properties that an abstract concept simply does not have.

But then I saw a recording of Moschen’s Light for the first time. And suddenly Schiller’s question had, if not an answer, then at least an example. Moschen’s manipulation performances are the closest thing I’ve seen to “freedom in appearance” translating to beauty. It’s not only that they’re spellbinding to watch. It’s that they leave me feeling, against all judgment, like neither audience nor artist have anything to do with why it’s beautiful.

When I watch Moschen perform an “isolation” – a technique where the ball appears fixed and unchanging at a single midair point – I’m left with the impression that he’s somehow unnecessary. That the ball would be doing its thing whether or not he were there. That he’s as much a spectator as I am. That Moschen’s performance, centered around a sphere that seems to behave independently of him, simply points out a beauty that would have forced its way into the world one way or another.

I know this to be untrue if I consider it rationally. The seeming autonomy of the ball is an illusion of perspective, the result of movements disguised with pantomime precision. It doesn’t work unless Moschen is there to do it.

Even so, I can never fully muzzle my doubts – but neither can I dim my sense of wonder.