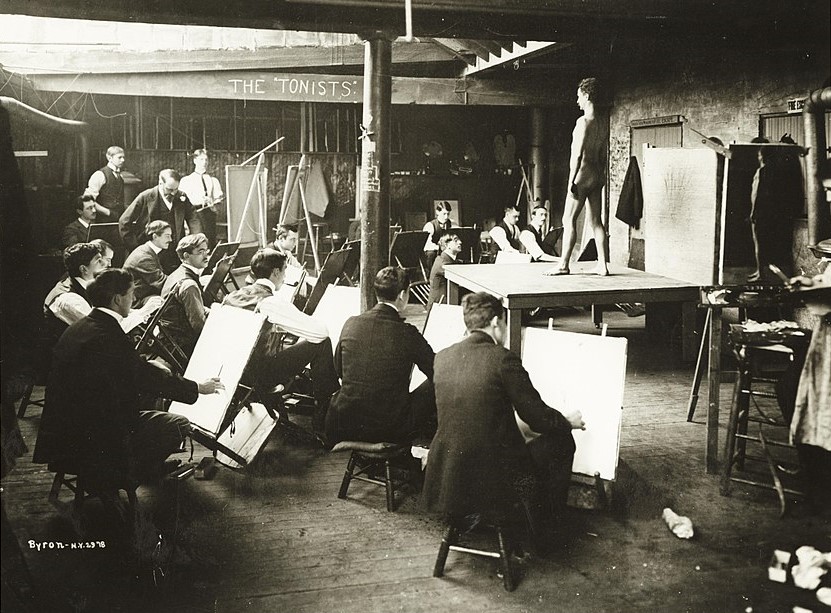 An art model returns the artist’s gaze. Privacy, nudity, and identity in the art studio

I’m modeling at the local art college for an illustration class, in which the model is used to create a scene. Because this sometimes involves costumes, the professor leads me into a closet where all types of clothing are stuffed on racks and hangers. He grumbles about the haphazard order of the garments and pulls out a Western-style white shirt that snaps down the front. It’s embroidered with bright flowers from one shoulder to the other. He gestures to my tasseled leather boots and says, “We could go with kind of a cowboy theme.” He hands me the shirt and looks for a hat to match. I unsnap the shirt, then unbutton and remove the cardigan I’m wearing over a white tee shirt. The professor freezes, averts his eyes, and says, “Uh, not here. There’s more privacy in the changing room.”

“I’m just putting it over my tee shirt,” I reassure him. He relaxes but still looks away. It’s clear that he thought I’d been about to undress in front of him.

Most of the modeling I do at this school is for life-drawing classes, which means I’m typically nude. When I started the job three years ago, the model conduct guidelines made it clear that, though my body will be on display, actually undressing in front of the students (and by implication, the professor) is prohibited. Each studio has a changing room specifically for the model that’s off-limits to everyone else. The only transition between clothed and unclothed is the brief moment when the model removes his or her robe.

The illustration professor’s assumption that I was undressing in front of him caused me to wonder: Why is it that the same instructor will look me in the eye when I’m not wearing one stitch of clothing, but he’ll recoil when he thinks he’s about to watch me remove those clothes? What makes disrobing more intimate than simply being fully nude?

In Modeling Life: Art Models Speak About Nudity, Sexuality, and the Creative Process, sociologist Sarah R. Phillips interviews multiple life models about their experiences. One of the models says, “It’s like you can be okay naked, but taking off your clothes in front of somebody is a private matter. It seems really ironic, I know…. Being naked in front of somebody is not quite as personal as taking off your clothes. ‘Cause when you’re taking off your clothes, you’re actually a person. But when you’re up there, if you’re already naked…it’s a performance.” This idea of modeling as performative is key. When I started modeling, I avoided eye contact with the professors once my robe came off. I didn’t want to break character. I wanted them to see me not as a person — Kate — but as the model, a physical form devoid of identity.

Once we grow out of childhood, we choose how to dress, and those choices become a means to construct our identity. The fact that we don’t see models’ clothing keeps personal preferences hidden and lessens their individuality. They’re simply a physical form, a collection of lines, shapes, and shadows. A nude, suggest Erika Langmuir and Norbert Lynton in The Yale Dictionary of Art & Artists, “differs from the representation of a naked human being in that it suppresses individual resemblance and particular circumstances in favour of harmonious, or abstract, design and timeless generalization.”

One summer, modeling for a community art class that included high school students, I waited in the changing room for my cue to emerge. One of the students asked, “We’re drawing naked people?” The professor responded, “We call them nude,” implying a crucial distinction: nude refers to the simple form of the human body, while nakedsignifies something more personal and defenseless. Robert Graves devotes his poem “The Naked and the Nude” to the difference between the two terms: “For me, the naked and the nude/ (by lexicographers construed /As synonyms that should express /The same deficiency of dress / or shelter) stand as wide apart /As love from lies, or truth from art.” To paraphrase another professor with whom I’ve worked, nakedness represents a vulnerability that reveals not merely our bodies but our true selves. It’s a state of being that removes the physical and emotional facades we build as disguises.

Some models tend to gaze at artists as intensely as they’re observed themselves. I remember a session with a small group of artists I’d worked with for a long time. At one point, one of them removed his glasses to rub his eyes, and before he put the glasses back on, I noticed for the first time the lines in the skin around his eyes and the slight sag underneath. I thought, “This is what his wife sees every night before he goes to sleep,” and pictured him leaning from their shared bed toward a night-table, folding up and setting down his glasses. In that transition between wearing and removing the glasses — a kind of disrobing — he changed from being simply one of the artists I model for to a man with his own life. I saw him as a man past middle age, someone for whom physical frailty — a form of vulnerability — was beginning to set in. It’s not that I didn’t already know all of this about him, but had it not been for that moment, I never would have considered his age or private life. Though I was nude, he became naked and vulnerable in the act of removing a physical accessory to his body.

Nakedness represents a vulnerability that reveals not merely our bodies but our true selves. it’s a state of being that removes the physical and emotional facades we build as disguises.

Therein lies one possible (likely unconscious) reason the former art professor was so uncomfortable with the idea of me undressing in front of him. My being completely nude, or in a costume of his choosing, protects both me and the professor. We are operating appropriately within the social constructs of the art studio, an environment in which I am seen as pure form. To see me in transit from clothed to unclothed would be to see me in a private moment, one more intimate than we should share in the classroom.

This is why, when I finish modeling that day, after ducking back into the changing room and trading the costume for my jeans and tee shirt, I wait to pull back the curtain till most of the students have left. I approach the professor so he can sign my timecard and nod his thanks. Then I step out of the classroom, walk down the hall towards the exit, and leave the building for the sidewalk and the sun, returning to my life as Kate — clothed, but naked.

Kate E. Schultz earned her MA at Ohio University, where she also served as Assistant Editor of New Ohio Review. Her poetry has appeared in Bayou Magazine, Midwestern Gothic, Eclipse: A Literary Journal, and others. This is her first prose publication.

Jason Clary is a painter and educator.

About the Author / Kate E. Schultz

Kate E. Schultz earned her MA at Ohio University, where she also served as Assistant Editor of New Ohio Review. Her poetry has appeared in Bayou Magazine, Midwestern Gothic, Eclipse: A Literary Journal, and others. This is her first prose publication.