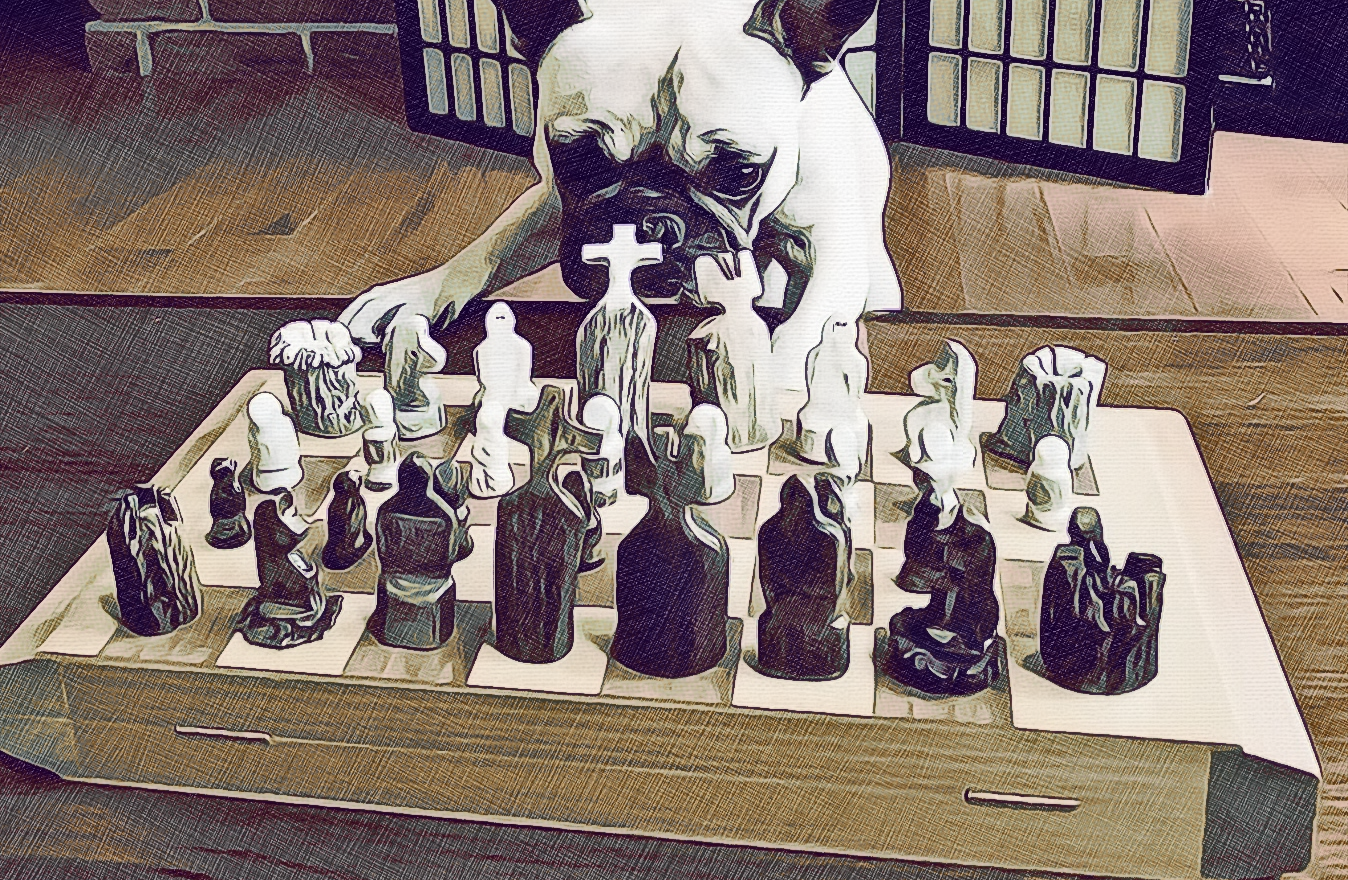 The Lewis Chessmen, Deer Antler, and a French Bulldog

“What could I make with antler?” I recalled the Lewis Chessmen and figured I could attempt to carve a set myself, although I’ve never worked with antler as a medium before. I had no pretensions that it would be even close to the famed Lewis set. In the end, the design was mine, a unique variant of classic.

The 800-year-old, carved, walrus ivory Lewis Chessmen makes me drool. I’m a chess enthusiast, and it caught my attention long ago.

The set was recently spotlighted when one lost piece was rediscovered in a Scottish drawer and sold for more than a million dollars. Originally found (some tales claim) under a huge stone slab on the Scottish Isle of Lewis in the 1800s by some naughty kids, it inspires wonder and amazement. It depicts 12th-century chess set characters in full battle regalia. Some chess enthusiasts and historians allege the rook is possibly a toothy berserker—a Viking word describing warriors so frenzied that they gnawed on their own shields. I’m both a chess player and an artist, and the precise carved articulation makes my head spin.

Regarding gnawing, I have a runt four-year-old French bulldog named Winnie. I am constantly told that she is the smallest bulldog anyone has ever seen. My daughter bought her in a weakened moment of the heart. However, our daughter is a night shift pediatric ICU nurse at Stanford, and having a dog does not work for nurse daughters. She asked my wife and me to keep the dog for…a bit. Three transfer ownership years have transpired.

The dog is mine now, and I am hers. She attends my every footstep. Winnie loves chewy things. Her favorite thing to gnaw is antler. But antler is expensive and pet shops sell it for anywhere between $8 to $28 for eight inches, and there is a shortage. So I asked high and low for antler, and an elderly neighbor and former hunter pulled three sets off his garage wall and said, “Let her chew. They’re just sitting there collecting dust.”

I cut the antler into three-inch lengths and she chewed them to nothingness. At some point I thought, “Kind of a waste of expensive deer antler. What could I make with antler?” I recalled the Lewis Chessmen and figured I could attempt to carve a set myself, although I’ve never worked with antler as a medium before. I had no pretensions that it would be even close to the famed Lewis set. In the end, the design was mine, a unique variant of classic. For three months, I cut with a circular saw, rotation sander, and Dremels. The most difficult part of the process was to get an idea of the shapes of the pieces. I stared at the antler surface a lot. It can contain bumps, cracks, or grooves, and the inner marrow can be soft compared to the outside—even the color fluctuates. If I screwed up on one piece, I made the same “artistic error” on the twin pieces.

One of the few times many wrongs do make a right.

The entire time Winnie sat at my ankles. Her fine sense of smell was tortured as antler shavings or dust filled the air. She patiently waited and lurked for minute cast-offs—or better yet, solid chunks of dropped antler.

I stained what would normally be the black team a deep walnut color. In general, I’ve left the original surfaces as I found them. Yet each piece is distinctly recognizable. The king has a cross on top—hardest to cut, I’ll add. The knights are definitely horses, the rooks are powerful castles. As a set, it is by no means even close to the Lewis Chessmen. But it wasn’t meant to be. Nevertheless, each uniquely carved piece gave me a great sense of accomplishment and satisfaction. I’d love to think that they too would last a few hundred years. Realistically, the vagaries of time make that unlikely.

Plus, Winnie would eat them in a nano–second.

The (original) Lewis Chessmen are in the collection of the The British Museum.

About the Author / Paul Karrer